There are toasted sandwiches falling from the sky. In a city defined by its hipster food trends, the crowds have assembled at Melbourne’s most eccentric restaurant. Expectant faces look upwards, kids on Christmas Eve, teenagers waiting for their favourite band to take the stage. Smartphones aimed for the heavens, parched desert-dwellers praying for long-due drops of rain. I can’t remember the last time I was in a dining room brimming with this much anticipation.

But I’m not in a dining room. No, I’m on Barry Lane – a usually forlorn alleyway just off Lonsdale Street in the wrong end of Melbourne’s CBD. The team behind this rare culinary suspense? A clutch of media types with nice hair, no tattoos, and certainly no formal training under a totalitarian gastronomic despot – no siree.

Adam Grant, David McDonald and Huw Parkinson are seven floors up – oblivious to the anticipation, frantically preparing jaffles on a trio of Brevilles, fiddling with fancy coloured pipe cleaners and undertaking final checks on their parachutes. Yes: parachutes.

Everything was much calmer 30 hours prior, up north in Fitzroy.
Sharing a beer with the aforementioned trio, I’m undergoing a crash course on jafflechuting. Jaffles + chutes. “The chutes are based on diagrams I found on the internet” begins Grant, the driving force behind a clandestine phenomenon that has already gained healthy notoriety and fervour amongst Melbourne’s trend-conscious diners. The ex-army boffin posting instructions for water bottle rocket parachutes surely didn’t have cheese and ham toasties in mind. The core Jafflechutes trio are surprisingly relaxed given one of their famous drops is looming, “things can get a little fraught” McDonald tells me, launching into an account of one particular chute dropping into the path of a patrolling police car…

15 August, 2013. The morning before their first launch. Going to bed on 10 orders, awaking to 60, pushing 100 by the time Grant was in work… the word was out, and the frantic dash to fulfil orders was rewarded with a windy night. A very windy night.

Six months on, several drops in, and the boys’ latest session begins to look equally chaotic. Order #1, Elizabeth: straight onto a window ledge, one floor down. A concerned silence washes over the team, slow motion, panic. (That last bit might just be my imagination, I’ve been sucked right into the drama – someone sign these chaps up for a movie deal.) Panic over, subsequent chutes meet the baying public with little incident. McDonald mans the Brevilles with honorary Jafflechuter Michael Sloan, the heightening stench of melted cheese is palpable, Parkinson occupies the wrapping, sorting of orders, Grant is orchestrating the madness, chuting with a little help from the young pair whose apartment the JC crew have commandeered for their latest drop.

The atmosphere at ground level – amid those who placed their orders two days prior, they who have arrived under instruction from Jafflechutes’ social channels to the ‘secret’ location – couldn’t be further removed from the intensity upstairs. And here, my friends, doth lie the true essence of Grant, McDonald and Parkinson’s eccentric endeavours.

Anticipation has been replaced by ebullience. Paper and foil are ripped from primitive lunchtime sandwiches with all the wide-eyed vigour an eight year-old reserves for pulling out Barbie’s hair and applying eyeliner to Ken. Chutes are caught, names are called, there’s relief, cheer.

At ground level a community are thrust together, companions in a perverse experience. Silenced couples each staring into the digital oblivion, more concerned in the social activities of their intangible internet buddies than the living, breathing sack of flesh and bones sat across the table? Not at this restaurant, amigos. Hallelujah!

Trend, fad, gimmick; Adam and his merry men have practically lined themselves up and invited their own firing squad. There is no escaping the cynical view that Jafflechutes is one hipster-food-fad too many in a city that has reached hipster-food-fad saturation point.
Scratch the surface though, experience the obsessive ardour behind crafting hundreds of DIY plastic parachutes, the sheer daftness of cooking up jaffle after jaffle, the atmosphere generated at street level during a drop…

Adam Grant, David McDonald and Huw Parkinson are architects of joy, pioneers in a new wave of nice – trailblazers in a global service industry so often sullied by surly staff and aloof better-than-thou posturing. Jafflechutes are not just delivering sandwiches by parachute, but dispatching smiles, launching good times. Jafflechutes are the irresistible feel-good glow that Ferris Bueller’s Day Off never fails to render, the “go get him” fist-pump you can’t stifle when Woody galvanises his troops in search of Buzz.

Coming to a city near you (well, maybe: there are plans afoot for New York, Vancouver and Montreal), Jafflechutes may well be that trend, that fad, that gimmick. But you won’t be able to resist rooting for the good guys.

Editor’s note: The Jafflechutes team are currently running a campaign on crowdfunding platform, Pozible, to help get them to New York. You can support the campaign by heading to their project page here: http://www.pozible.com/project/179962 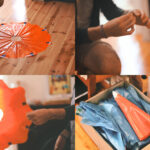 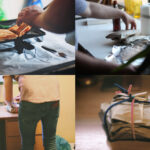